Did Henry VIII have good qualities? 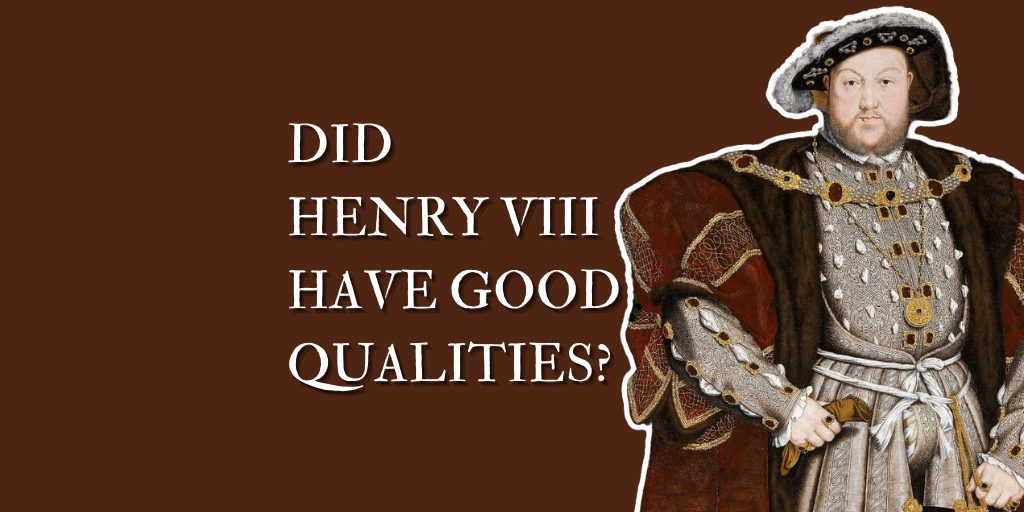 Henry VIII is always destined to be remembered as the fat, mean, ruthless tyrant that dominated England for his entire 36-year reign.

He’s one of the colossi of English history.

We all remember the six wives, the beheadings, the ruthless disposal of Chief Ministers, former friends, and anyone that stood in his way. We remember Henry’s desperate break from Rome to secure his first divorce and then the systematic disillusion of the monasteries, changing the face of England forever.

We forget that Henry VIII wasn’t that mean tyrannical figure for the vast majority of his long reign. He was a perfectly reasonable renaissance prince.

Henry VIII had many good qualities and achieved many things that have benefited the country right through to the present day.

Henry was one of the most handsome men to ever sit on the throne of England. He was incredibly tall for the period standing over six feet in height. He was athletic, charming, and affable. He was also one of the most intelligent people ever to wear the crown.

This article looks at 10 of Henry VIII’s good qualities and achievements.

Henry VIII had a fractious relationship with the concept of translating the Bible into English. There was even more debate in his mind about who in the country should be allowed to read the Word of God.

However, he did introduce his “Great Bible”, the first official translation of the Bible into English. A copy was placed in every single parish church in the country.

The front cover of the Great Bible is quite amusing. Henry dominates the scene and is seen handing out his Bible to both archbishop Thomas Cranmer on one side and Thomas Cromwell on the other. These two leading figures of the court pass it through the various levels of society down to the entire country. An interesting side notes: you will see that God is also depicted on the cover…but squished in at the top, just above Henry, and is considerably smaller than the King. This version of The Great Bible in colour is possibly Henry VIII’s personal copy.

2. The Field of the Cloth of Gold

The Field of the Cloth of Gold meeting on the 7th of June 1520 helped pave the way for the modern diplomatic summit. UK Prime Ministers wouldn’t be traveling the globe and visiting the President of the United States in the White House without this significant event.

It was a grand meeting of the King of England and the King of France. The summit was held on semi-neutral ground just outside Calais. (Remember that time Calais was a part of England.) It was a grand spectacle that lasted several days and resulted in a peace treaty and the betrothal of Princess Mary to the Dauphin of France,

It was an opulent event; no detail was spared. A massive canvas city had been erected, the wine flowed from the fountains, and there were great feasts. There were numerous sporting events, and if the legend is believed, the two kings wrestled; the King of France emerging victorious.

Henry VIII loved intelligent women. It is no secret that the most important of Henry VIII’s wives, and those that thrived, were the most well educated; Catherine of Aragon, Catherine Parr, and Anne Boylen.

Henry enjoyed intellectual debate with his wives, and in many ways, he liked to be challenged by them. (Catherine Parr possibly pushed him too far, which once caused his wrath).

The Tudor period was still an era where women were not offered the same educational opportunities as men. This wasn’t the case with Henry’s daughters. He ensured that Mary and Elizabeth had an unrivaled education.

The young Lady Elizabeth attended the same lessons as her younger brother, the future Edward VI. She, therefore, benefited from the best tutors in the land. It served her well when she took the throne.

We often depict Henry VIII as a fat, smelly man. Unfortunately, the ulceration of his legs following his jousting accidents did cause a foul smell to accompany him. However, this was only in his final few years, and he was a fastidious man obsessed with cleanliness.

He ordered that Prince Edward’s rooms be scrubbed with soap and water twice daily. It seemed to be that Henry VIII understood the link between cleanliness and illness.

During his reign, he established what would soon become the Royal College of Physicians and advanced medical science, wherever possible.

5. Henry VIII was a sportsman

The very first pair of football boots known to be in existence belonged to Henry VIII. He ordered them in the year 1526 and are part of an inventory of his wardrobe.

He was a famed jouster. He was built for the sport. Henry was tall, broad, and heavily muscular in his younger years. When he put on his armour, he would be an intimidating sight. He regularly won most of the lists he ran in, not just because he was the King of England. Horse Guards Parade in London was the former tiltyard of Whitehall Palace.

He was also a keen tennis player and had his own court at Hampton Court Palace. Henry’s archery skills rivaled even some of the greatest archers in his army. He also played bowls, famously getting into an argument with Thomas Wyatt centred around Anne Boleyn’s affections and not the bowls match.

He would spend hours hunting, often wearing out five or six horses during a morning.

It is no surprise that once his jousting injuries stopped his sporting activities, his health declined, his mental instability increased…as did his waistline. Henry VIII was a skilled musician, dancer, actor and also tried his hand at poetry.

As well as being to play several instruments, Henry composed many pieces. Pastime with good company is probably the most famous of his works. Greensleeves is often attributed to him. However, there is no definitive evidence to suggest that the King wrote this traditional piece of music.

Henry danced regularly and was skilled at the art; he was surprisingly light-footed for a man of his size.

He also acted and would often dress up and take part in the various mummings at court. Henry’s great trick was to dress up as some mysterious figure. He would then shock the crowd when he took off his mask to reveal that he was the King. Of course, there weren’t many people at court who had the stature of Henry VIII, so people had to mock surprise when he revealed himself.

He also wrote poetry. We aren’t sure as to the quality of his work in this field. One of the accusations leveled at Anne Boleyn during her trial was that she mocked the King’s poetry. It might just not have been very good.

Henry also wrote academic essays, the most famous of which is the Defence of the Seven Sacraments. Thomas Moore had a guiding hand in the work, but Henry’s input and intellectual ability, should not be underestimated.

Henry VIII was effectively the father figure of the Royal Navy.

Henry VII left him just a handful of warships. Henry embarked on an extended spending spree. He had a determination to build his navy into the greatest in the world. By the end of his reign, the navy consisted of more than forty ships of differing sizes.

The Great Harry was a new carrack and at its launch was the biggest ship in the world. It was, of course, named after the King.

Henry VIII’s most famous ship was the Mary Rose, which unfortunately sank beneath the waves with the loss of over five hundred men during the Battle of the Solent.

Henry’s navel achievements weren’t just the volume of ships built. Still, great advancements in maritime engineering took place, such as gunports for the cannon. These enhancements came at a significant cost. However, without this investment, it seems unlikely that England would have been able to stave off the Spanish Armada during Elizabeth’s reign.

He felt that his southern coast was grossly undefended and built and fortified numerous castles and forts along the south coast. Many of the fortifications that were made were of Henry’s personal design.

They were known as Device Forts, and the cost was over £376,000 at the time. Southsea Castle, Deal Castle, and Calshot Castle are all examples of Device Forts.

Many of the fortifications that Henry VIII built were still used during the Second World War and formed an integral part of the UK’s defences.

We all know that Henry VIII made a massive grab for wealth when he dissolved the monasteries.

However, Henry VIII was generous when it suited him.

When Henry was interested in a lady at court, there would be a sudden influx of costly gifts; jewels, furs, and cloth were his standard presents.

He would also reward loyal subjects with titles, wealth, and land for the monasteries. He even sent gifts of meat from the royal hunt to certain members of the court.

Gifts from the King were always welcome. It was a sign that people were in favour.

10. The advancement of women

Henry is often considered unchivalrous when you think of his attitude to many of his wives.

However, we shouldn’t forget the role Henry VIII played in the advancement of women.

Two of his wives were made Regent of England when he was away waging war in France; Catherine of Aragon and Catherine Parr. He trusted the ability of women to lead.

He specifically reinstated his daughters into the line of succession. This resulted in Mary becoming the first female sovereign of England and her half-sister following her to the throne. Eleanor of Aquitaine: The Most Powerful Woman In Europe?